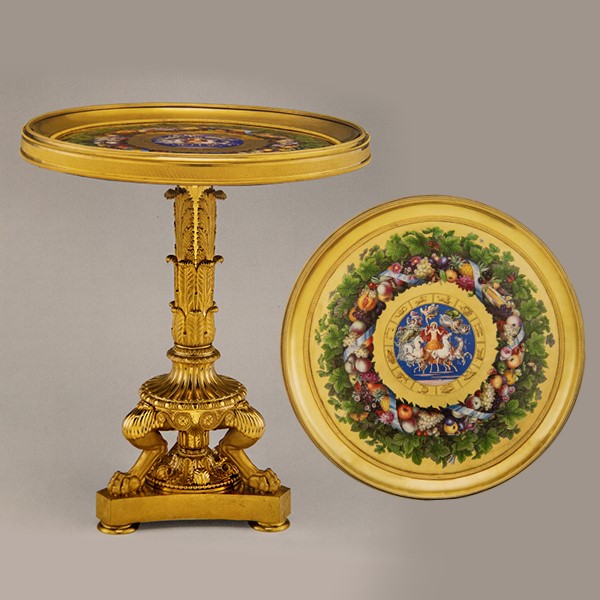 The porcelain table to a design by Schinkel, now one of the top 100 furniture treasures in the Metropolitan Museum of Art

It had been in the collection of the first managing director of Christies in Australia, who purchased it in Melbourne. On his death it was consigned by his widow to Sotheby’s for sale.

I sold a half share in the table to Harris Lindsay in London and together we employed a researcher to investigate at the KPM archives in Berlin the history of the table prior to the sale to Mrs Wrightsman and her generous gift to the museum.

It is described and illustrated European Furniture in the Metropolitan Museum of Art Highlights of the Collection Item 96:

This dazzling table is made entirely of porcelain with the exception of the reeded gilt-metal rim with concave mouldings around the circular porcelain top, the canted triangular gilt-metal base with low feet, and the gilt-bronze beaded moulding encircling the porcelain curling-leaf decoration on top of the base. There is also an iron column that acts as a spine, disguised by four porcelain acanthus-leaf sleeves fitted one above the other, set off by gilded metal mouldings. The gilding of the porcelain surface of the stand is daringly finished in different techniques that create delicate matt and brightly polished areas, producing the trompe l’oeil effect of a gilded cast-bronze support.[1]

The fabrication of the Museum’s spectacular table was made possible by new production and colour technologies that were developed after 1832 at the Royal Porcelain Manufactory, Berlin, to attract royal patronage.[2] The catalogue of the Academy Exhibition of 1834 mentions “a round table with porcelain top and porcelain foot.”[3] Since porcelain tabletops were usually fitted with supports of metal or carved wood, this piece would have been a novelty and of great interest to the public. A Berlin newspaper devoted much space to the subject in November of that year: “The porcelain table with a twenty-six-inch circular top displayed at the current exhibition in the rooms of the Royal Academy is characterized not only by excellent colour, gilding, and painting but by a beautifully smooth top . . . [and this] can also be said of the gilded table foot. Only the triangular base of the piece is of gilded bronze: all other [parts], even those that are difficult to make, such as the ancient griffins feet, are of porcelain, and [they] testify to the skill of the modellers employed by the manufactory, and to their good fortune in overcoming the difficulties encountered during the firing of the porcelain.”[4]

It is tempting to identify the table mentioned in the Berlinische Nachrichten with the Museum’s example. Very likely only two tables of this size with a porcelain foot were produced at the manufactory. One was given by King Frederick William III of Prussia (1770–1840) to the grand duchess of Weimar in 1838. It is described in the king’s privy-purse account as having a “top 25 inches in diameter on a porcelain foot with figural painting.”[5] The same account book, which the king began to keep in 1811 to record royal gifts within his family (and their value) as well as diplomatic presents to foreign dignitaries, mentions in much more detail an earlier gift by the monarch to Grand Duchess Helena Pavlovna of Russia (1807–1873). In an entry of 1 June 1835, the Museum’s table is described as follows: “For Her Royal Highness the Grand Duchess Helene, 1. Tabletop, circular, 25 inches in diameter, with coloured figures, the subject Helios, on a blue background, surrounded by a zodiac border in brown and gold on matt gold, the whole background polished gold, on which coloured fruits and flower garlands are intertwined with a blue band, also coloured butterflies and insects.”[6] The price (1,200 taler) was very high, surpassed only by that of the monumental vases the king commissioned as gifts for the Russian court.[7] The top is richly decorated with a central tondo in which Helios, the sun god, is seen rising up to heaven from the eastern Ocean in a carriage pulled by four white horses. “Iconographically the signs of the . . . zodiac [in the band around the tondo] belong to the triumph of light during the course of the seasons.”[8] The latter are represented by garlands of the fruits and flowers that flourish as the year progresses, and these are displayed on a wreath of vine leaves, autumn’s bounty. The exotic fruits, such as pineapples and pomegranates, possibly symbolize winter, when they would have been cultivated in the fashionable and expensive greenhouses of the period, a luxury as extravagant as a table made almost completely out of porcelain.

As unusual as this lavish present was the character of the recipient, Helena Pavlovna. Born Princess Charlotte of Württemberg, she married, in 1824, Grand Duke Michael Pavlovitch, the youngest brother of Alexander I of Russia (1777–1825). She was one of the most fascinating personalities of the period, always a little ahead of her time. Socially and politically concerned with Russia’s future, she was a most outspoken advocate of the abolition of serfdom, setting a courageous example on her own estates. In 1859, two years before Alexander II (1818–1881) officially abolished serfdom, the grand duchess freed more than fifteen thousand people living on her estates in the Ukraine.[9] During the Crimean War, this mother of five daughters established a nursing unit, a step that was aggressively opposed by leading military figures. This was the first war in which medically trained women served on the battle field, saving the lives of thousands of soldiers. The salon of her residence, the Mikhail Palace–designed by Karl Rossi (1775–1849) and the finest example of architecture in the Russian Empire style–was one of the cultural centers of Saint Petersburg. The palace now houses the State Russian Museum. Beginning in 1852, the gifted pianist Anton Rubinstein (1829–1894) was part of the grand duchess’s artistic entourage. She firmly supported Rubinstein’s ambition to found Russia’s first musical conservatory, whose most famous student would be the composer Peter Ilyich Tchaikovsky (1840–1893).[10]

The Museum’s table can be attributed to Karl Friedrich Schinkel, Germany’s most important nineteenth-century architect, who was also a gifted interior designer (see 1996.30). Schinkel’s tables are distinguished by their strong compositions and inventive interpretations of ancient models, especially the tripod form.[11] Closely related shaft designs with highly stylized acanthus leaves arranged in tiers can be seen on the monumental candelabra of 1831–32 in the Schinkel Pavilion at Schloss Charlottenburg, Berlin.[12] It seems that during this period in Berlin only Schinkel could coordinate many different craftsmen in the production of a large and complex object that looks magnificent when seen from a distance and withstands the close scrutiny of a connoisseur in its refined details. These qualities, rarely seen in furniture, characterize this extraordinary table.

[8] Ilse Baer. “Table Tops from the Berlin Porcelain Manufactory (KPM) from the First Half of the Nineteenth Century.” In The International Ceramics Fair and Seminar Handbook, 2001, p. 17.