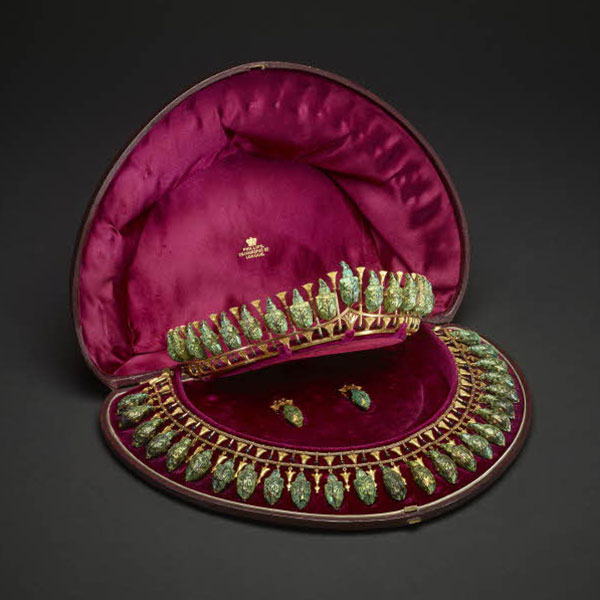 Export stopped Reviewing Committee on the Export of Works of Art UK, purchased by British Museum.

The survival of this unique parure by Phillips of Cockspur Street must be considered miraculous, given the fragility of the beetle shells which adorn this jewel. The fashion for adorning clothes and jewellery with real insects was popularised during the mid-nineteenth century, although the concept seems alien to us now, this remarkable tour de force has not lost its capacity to amaze.

The growth of public collections of tropical plants and animals during the 19th Century, as well as the publication of books including ‘The Origin of the Species’ in 1859, sparked a popular interest in the natural world. The opening of the Suez Canal in the 1860s allowed the British public to indulge their thirst for exotic plants, insects and animals on a commercial scale, starting a fashion to incorporate these new-found materials into jewellery.

Among the new curiosities that were introduced were tropical birds, corals, shells and insects from South America. In particular, jewellers alighted upon a species of beetle that had a mesmerizing green and iridescent shell, and were described in a journal of 1872, as “specimens of beautiful colour, one could scarcely hope to see anything better.”

The beetles used in this parure were acquired by the former Foreign Secretary, The Third Earl of Granville, in the late 19th Century, a token of gratitude from the Portuguese ambassador of the day, to Earl Granville, for his work in securing a trade treaty with Portugal. It is believed that they were mounted into the parure between 1884-85.

The work of setting the beetles into this parure would have been a sizable commission. The famous firm of Phillips of Cockspur Street established in 1839 were already well known for producing jewellery, in the neo-classical, Egyptian and neo-Renaissance styles and this parure is heavily influenced by antiquity. The form of the necklace, for example, is similar to the Classical fringe necklaces being excavated from archaeological sites in the Mediterranean. The tiara, which is decorated with stylised lotus motifs, is redolent of ancient Egyptian treasures. The fashion for setting these newly discovered beetles in Egyptian style settings was popular and can be seen with other examples of beetle jewellery, as they are a covert reference to the imagery of the scarab.

These exotic curiosities seized the public’s imagination, for some it caused panic, an association being made between the arrival of these exotic insects and poor harvests. It was feared that by introducing these insects to the United Kingdom, there was a risk of infestation. A satirical cartoon was published in Punch, of a woman wearing a gown in the form of a giant beetle. The caption reads ‘Arrived at last; but nothing so terrible after all.’, referring to the many false sightings of beetles all around the United Kingdom These misconceptions were understandable, for it must have been an unnerving sight to see women, such as the famous actress Lillie Langtry, with their dresses covered in tropical insects Lillie Langtry wore a gown covered in butterflies to the Marlborough House Ball.

The parure remains a piece of pure theatre, and continues to fascinate and confuse, seemingly alien today it provides a unique window into Victorian society and a tantalising insight into its character and interests.