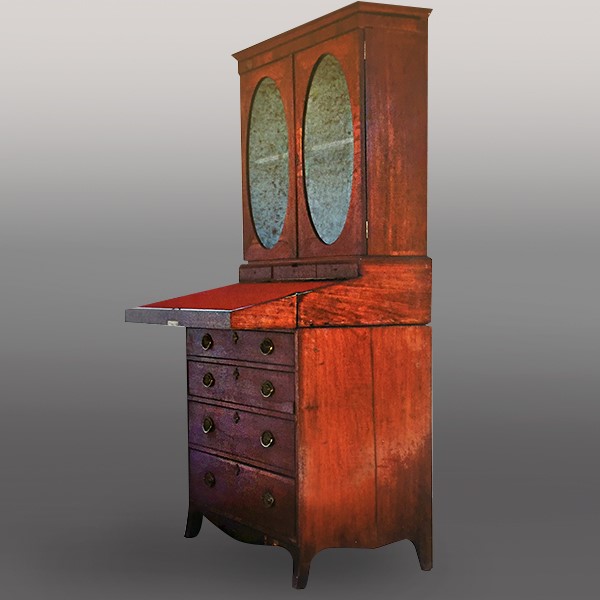 I negotiated the purchase of the cabinet from ‘King’ family descendants, with the help of Ron Radford, the best of the National Gallery Directors who was badly let down by the Board.

A small bespoke Travelling Secretaire Bookcase with four draw chest under dismantles for use as three separate items of furniture, a chest of drawers, standing bookcase and a secretaire for use on board ship or in the field. Made by Lawrence Butler in the Sydney Lumberyard, circa 1805/6, as per documents previously supplied.

For discussion of these timbers see The Art of the Cabinetmaker, Part I, pp 54 & 55, by J. B. Hawkins

Provenance:
The Governor of New South Wales, Phillip Gidley King (1758-1808) commissioned the desk from Lawrence Butler in the Sydney Lumber Yard in 1805 & 1806 between the date of the Battle of Trafalgar 21 October 1805, as possibly indicated by the black, mourning baleen stringing and delivery before  his intended departure from the Colony on 15th August 1806.

Returned to Sydney with his widow Anna Josepha King, died 26th July 1844 at Parramatta whilst living with her daughter AMM (nee King) at “The Vineyard” Parramatta.

To their son Michael Willsallen, “The Chase” Moss Vale.