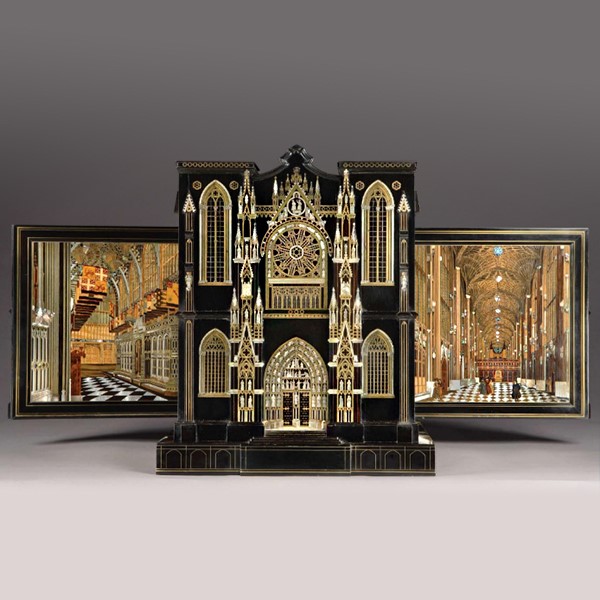 Friedrich Ludwig Hausberg (1817-1886) born in Berlin, Prussia, became a naturalized British subject under very unusual circumstances on 23 March 1840. This was the year that Prince Albert of Saxe-Coburg married Queen Victoria, and the construction of the cabinet was begun. The cabinet was completed in 1857, the year Prince Albert became ennobled to the position of ‘Prince Consort’. The naturalization of Hausburg is remarkable for two reasons: the normal time frame from application to acceptance was four years: – Hausburg was naturalized in five weeks, and the Act of naturalization was personally signed by Queen Victoria, which the Clerk of records at the House of Lords Archives Westminster, advised was unique in his experience. These facts indicate that Hausburg was the beneficiary of the direct intercession of Queen Victoria, who perhaps acted at the behest of the Prussian Court. Prussia was adjacent to the Duchy of Saxe-Coburg.

In partnership with his uncle, August Wilhelm Bernard Promoli, a business selling clocks and watches was opened in the Old Post Office Buildings at 24 Church Street, Liverpool, in 1840. Their prior joint venture was a shop in Paris, and clocks are recorded with their joint names. The new business prospered and expanded. In 1841, it passed into the sole ownership of Hausburg selling from extensive premises furnishings, both British made, and imported of high quality. The business is spoken of approvingly, and at considerable length in an American publication ‘The Merchant’s Magazine & Commercial Review’ in 1849.

The exterior of this jewel of craftsmanship is constructed in Ebony, with the tracery, minute figures, Rose windows, doors and imbricated roof in brass and silver wire, and mother-of-pearl. The turrets have concealed sliding covers, with compartments under, and there is a well hidden spring operated ‘secret drawer.’

The interior reveals marquetry work representative of the very finest ability and technique, and is accessed by doors minutely depicting scenes from the interiors of King’s College Chapel, Cambridge, and Westminster Abbey. These open to disclose a central hall with a tesserated chessboard floor, barred by hinged ormolu gates; with seven marquetry faced draws to each side; – to the left, Kew Palace, the entrance of the Old House of Lords, Brighton Pavilion, and the castles of Windsor, Dover, and Caernarvon and Kenilworth, and two doors with depictions of Holyrood House and Westminster Abbey with plain draws behind; and to the right, confirming doors illustrating St. Pauls Cathedral, and St. James Palace with plain draws behind, with The Tower of London, Hampton Court, the Palaces of Buckingham and Kensington, Virginia Water and Bushy Park as marquetry facia to the seven further draws. The cabinet is signed in marquetry inlay ‘EL Hausberg Fecit Liverpool Begun 1840, Finished in 1857’.