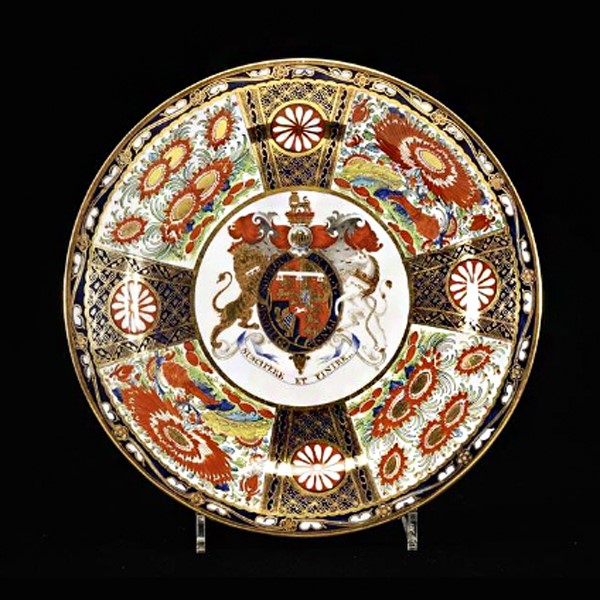 The Hanoverian Duke of Cumberland Service

A porcelain Worcester service purchased  from Partridge of London in 2005 for £460,000.

An entry in the Chamberlain order book for 28th September 1802 records His Royal Highness Duke of Cumberland, St.James’s. 1 complete tea set, 3 dejeurne Best Queen with 12 coffees and 6 large plates. 12 saucers for coffee.This entry may be a reference to the first of a series of small orders placed by the Duke with the firm over the next two to three years and which now comprises The Duke of Cumberland Service.

After the Duke had been made Colonel of the 15th Hussars in March 1801, he took personal command while the regiment was stationed in the West Country. As a result, he made a number of semi-official visits to local towns and was a frequent visitor to Worcester. Indeed, in September 1803, the Duke was granted the Freedom of the City.

A report in The Times for 2nd October 1802 (see G.M.Willis, Ernest Augustus, Duke of Cumberland and King of Hanover, p.58) indicates that on one visit to the city he toured the Worcester porcelain factory. On this occasion it was reported by the Berrows Worcester Journal. 29th September 1802, that His Royal Highness visited Chamberlain’s factory and warehouse ‘where he was pleased to favour the proprietors with a very liberal order’.

Monday evening last, about eight o’clock, his Royal Highness the Duke of Cumberland arrived in this city, and was received with the acclamations of a great number of persons who had assembled before his lodgings. Considerable anxiety has since prevailed among all ranks of people to behold the son of our beloved Sovereign, and his Royal Highness has returned the attentions which have been paid to him with the most condescending affability. Yesterday morning his Royal Highness viewed the highly-improved China Manufactory of Messrs. Chamberlains, with which he expressed himself much gratified, and afterwards visited their warehouse in High-Street, where he was pleased to favour the proprietors with a very liberal order.

It is believed that the service was eventually delivered to St.James’s either in 1806 or 1807 where it probably resided until the Duke’s move to Hanover as King Ernst I. Unfortunately, the Worcester account books do not provide the evidence for the further orders or the date of delivery.

In 1877, Richard William Binns, the Managing Director of the Royal Worcester Porcelain Company, illustrates a piece from the Duke of Cumberland Service (‘A Century of Potting in the City of Worcester’, p.229) which describes as a plate from a breakfast service executed for the Duke in 1806. The border decoration known as ‘Best Queen Mosaic’ (pattern no.78), is derived from that of the earlier Japanese Imari styles so fashionable in England in the early 19th century. Binns notes that the pattern was then the style of the period and it attracted several notable clients to the Worcester factory. It was quite common for the factory to take several years to produce services of this size. For example, Admiral Lord Nelson placed an order for a similar armorial service with the Best Queen Mosaic border pattern following a visit to the factory in August 1802. It appears to have been made simultaneously with that of the Cumberland. Sadly, the Nelson Service was not delivered to his family until after the Admiral’s death at Trafalgar in October 1805 and even then it had only been partially completed.

A further devotee of porcelain and a leader of fashion in the decorative arts at the time, was the Duke’s elder brother, the Prince of Wales. When shown an example from the Cumberland Service in the factory’s showroom – presumably one of the trial pieces – during a visit to the factory on 25th September 1807, he ‘discovered and pointed out a piece of his own service, made by Messrs. Chamberlain some short time since, and with which he expressed himself most perfectly satisfied, but would not now (he flatteringly observed) bear a comparison with the greatly improved and most beautiful articles at present before him.’ The Prince remarked that he was ‘infinitely pleased with the abundant variety of patterns presented for his inspection and pronouncing their equal degree of merit did not admit of any decided preference, his Royal Highness desired a large table service, full dessert, breakfast, and tea-set, with every necessary appendage, might be made for him….’ (Binns, op.cit., pp.230-231).

A specimen plate for the Duke of Cumberland Service was sold at Phillip’s, London, 6th December 1995, lot 299, from the Collection of C. Wentworth Wass. Painted with the full Royal arms, the ribbon had been left blank for the Duke’s motto. It differs from the completed service in the use of a shaded background to the arms and the absence of a motto.