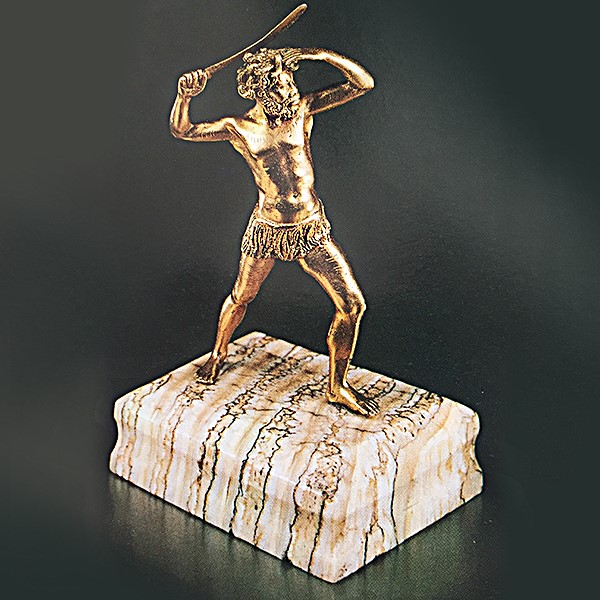 The Gold Statuette of Ricketty Dick

A unique gold statuette of an Aboriginal.

J. B. Hawkins, Australiana August 2000, Julius Hogarth Behind the Shop Front, part 2., illustrated page 72.  There are two known surviving statuettes by Hogarth this gold statuette, plate 4, and silver statuette, plate 5, in the Powerhouse Museum, Sydney were, I suggest, individually modelled by Thomas Balcombe from a wax sculpture then cast using the lost wax process by Hogarth, making them unique.

The Australian Antique Collector July – December 1993. Illustrates an inkwell by Hogarth depicting Ricketty Dick, the well-known Aboriginal identity who lived on a dry patch of ground in the swamps of Rose Bay, where he begged for tobacco and food. In his later years he was provided for by W. C. Wentworth, he died in 1863, at an approximate age of 65. Julius Hogarth used Ricketty Dick as a model for several projects which are amongst the first examples of the portrayal of indigenous people of  Australia as “the noble savage”.

The inkwell sold for $33,000 in a 1999 Christies sale, the purchaser being Caroline Simpson.

Gold and Civilisation Exhibition, National Museum of Australia 2001, illustrated in the catalogue.

I purchased this from David Lavender in London, after it had been first been sighted by an eagle eyed Ruth Simon in New York.