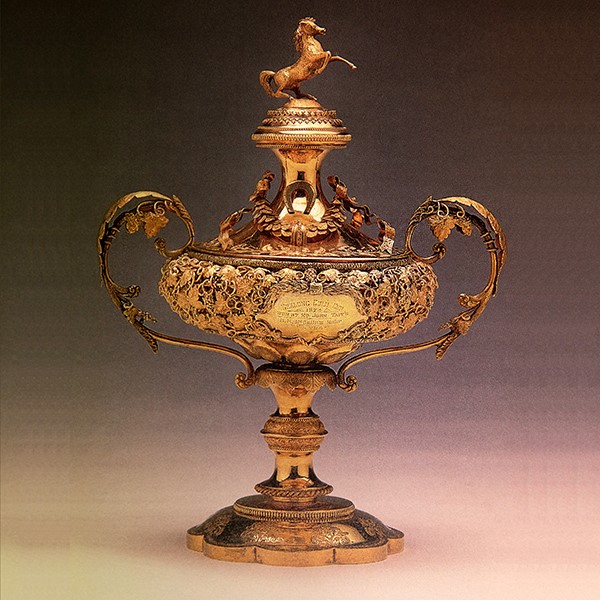 The Geelong Advertiser of 1874 states: making of the Geelong Racing Club 100 sovereign gold cup, has been entrusted to Mr Fischer, in design it will be quite different to anything made here before, being of oval shape on an elegantly chased stem, the two handles following the contour of the bowl, the lid will be surmounted by a horse  rampant, signed by Mr S. Woodhouse, the height will be fully nine inches and the weight not less than 20 ounces. A more elegant trophy could not have been desired.

Edward Fischer, Silversmith of Geelong time for a closer look?  Veronica Filmer and Brian Hubber  pp. 62-65  In this article Filmer draws attention to two collections of design drawings one purchased by the Geelong Gallery, the other purchased by a private collector relating to the products of Fischer’s workshop, the addition of this original material to our corpus of knowledge of Fischer’s work should be published.

Purchased by John Hawkins from Miss Tait, then living in Moss Vale NSW, the grand-daughter of John Tait (1813-1888) racehorse owner and trainer, born 5th November 1813 at Melrose near Edinburgh, trained as a jeweller he reached Hobart 2nd November 1837 and opened a jewellery business. Moving to NSW he took over the Black Bull Inn at Bathurst in 1847. Strong and wiry his great skill as a boxer enabled him to tame his rougher patrons, Tait won the NSW St Ledger at Homebush three times, three Queens Plates in Victoria, moving to Sydney in 1853 he became the Licensee of the Commercial Hotel in Castlereagh Street.

Purchased in the United Kingdom by Mr P Simon.

It is of interest that Brian Kennedy in 1998, then Director of the National Gallery in Canberra, informed me  in person that the reason they did not buy Australian gold cups was that they did not buy basement material.