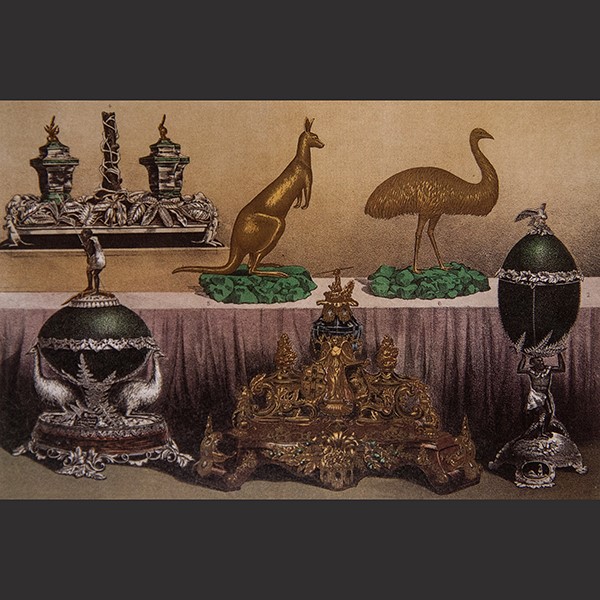 Top left in the photograph taken from the lithograph in Waring.

Exhibited by Flavelle Brothers at the International Exhibition of 1862.

Described J. B .Waring Vol 3, plate 292, as: from New South Wales we have given an inkstand made of myall or violet wood, so called from its peculiar scent, malachite and gold, the metal work being very tastefully designed and reproducing some of the native flora among which are to be remarked the Kylonitiun or native pear, banksia and ferns. The design, feeling for nature and execution of this peace is infinite credit to Messer’s Flavelle Brothers, Sydney by whom it was made.   Malachite mounted and pre 1862 this is the proof that Charters Towers malachite was being used in New South Wales at an early date.

Jonathan Sweet, Australiana, February 1987. An overview of National and International Exhibitions between 1862 -1886. Sweet particularly noted the importance of the 1862 Exhibition and the use made by the Australian Exhibitors to advertise both their wares and Australia as a haven for potential emigrants and investors.

The Masterpieces of Industrial and Sculpture at the International Exhibition 1862, plate 292 J B Waring, (copy attached) and separate mounted illustrated plate. Items such as the inkwell, illustrated in this great three volume catalogue confirms the importance that maybe attached by contemporary Australians to this internationally exhibited object. This inkwell joins the select group of Australian items made by Hogarth and exhibited in London in 1862: Natives in Precious Metal,  a gold emu and kangaroo exhibited by the wife of the Governor Lady Young. Flavelle and this ink stand the latter two being illustrated in the Waring plate.

Purchased by John Hawkins from Mallett Bourdon House, London in 1972 for £900 and since sold twice.