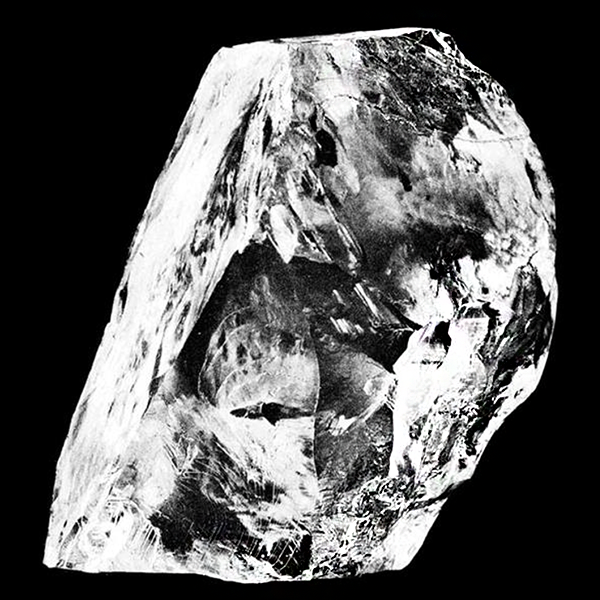 An exact model of the original 3,106 carat flawless stone made by Tiffany in New York this and the Treasury Inkwell given by the King to Joseph Asscher for splitting the Diamond in 1908 were sold to the Queen from the Olympia Fair in 1998.

On January 25, 1905, at the Premier Mine near Pretoria, a 3,106-carat diamond was discovered during a routine inspection by the mine’s superintendent. it was the largest diamond ever found.

Frederick Wells was six metres below the earth’s surface when he spotted a flash of starlight embedded in the wall just above him.

His discovery was presented that same afternoon to Sir Thomas Cullinan, who owned the mine.

Sir Thomas then sold the diamond to the Transvaal provincial government, which presented the stone to Britain’s King Edward VII as a birthday gift.

Worried that the diamond might be stolen in transit from Africa to London, Edward arranged to send a phony diamond aboard a steamer ship loaded with detectives as a diversionary tactic.

While the decoy slowly made its way from Africa on the ship, the ‘Cullinan’ was sent to England in a plain box.

Edward entrusted the cutting of the Cullinan to Joseph Asscher, head of the Asscher Diamond Company of Amsterdam.

Asscher, who had cut the famous Excelsior Diamond, a 971-carat diamond found in 1893, studied the stone for six months before attempting the cut. On his first attempt, the steel blade broke, with no effect on the diamond. On the second attempt, the diamond shattered exactly as planned; Asscher then fainted from nervous exhaustion.
The Cullinan was later cut into nine large stones and about 100 smaller ones, valued at millions of dollars all told.

Both of these stones, as well as the ‘Cullinan III,’ are on display in the Tower of London with Britain’s other crown jewels; the Cullinan I is now mounted in the British Sovereign’s Royal Sceptre, while the Cullinan II sits in the Imperial State Crown.