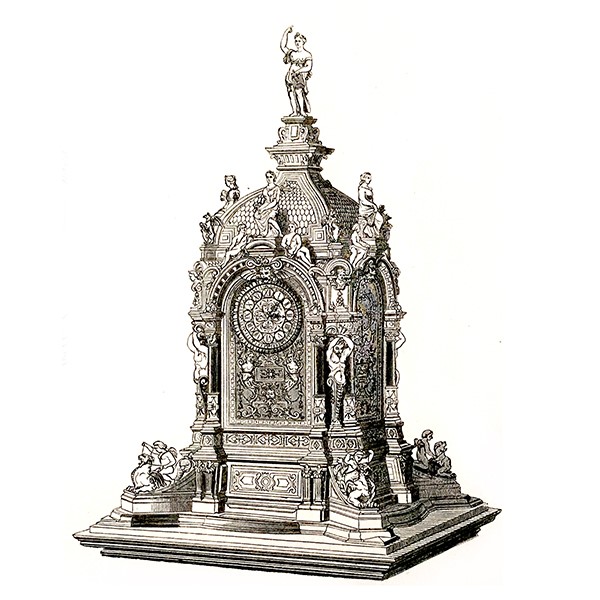 The Baugrand Countess of Dudley Clock

After the Bowes Museum failed to raise funds the export was allowed, see Export Licence application details below:

‘A gold, silver-gilt, lapis-lazuli and enamel clock by Gustave Baugrand, Paris, 1867 It is of architectural form in Neo-Renaissance style. The body is of silver-gilt with enamelled gold herms at the corners set between pairs of lapis-lazuli columns and it is 26cm in height. Above the arch of each side stands a figure of one of the Four Seasons with attendant putti. A figure of Urania surmounts the roof. The clock is engraved at the front near the base ‘PARIS BAUGRAND ANNO 1867’.

The applicant had applied for a licence to export the clock to Singapore. The value shown on the export licence application was £295,000 which represented the agreed sale price. The senior curator of Sculpture, Metalwork, Ceramics and Glass at the Victoria and Albert Museum, acting as expert adviser, objected to the export of the clock under the third Waverley criterion, on the grounds it was of outstanding significance for the study of the work of Paris goldsmiths of the Second Empire and of British nineteenth-century patronage of the decorative arts. The expert adviser stated that the clock was exhibited in Paris in l’Exposition Universelle of 1867 and subsequently acquired by the Earl of Dudley. It had 120 pieces, took eighteen months to make, and was the result of Baugrand’s collaboration with P Fauré, the designer, Honoré (Honoré-Séverin Bourdoncle) and Fannière Frères, chasers, Théophile Soyer et Sollier Frères, enamellers, Eugène Gagneré, enameller, and Ernest Hue, the engraver of the panels. All received official recognition as exhibitors or coopérateurs in the 1867 Exhibition. Honoré (1823-93) worked on the reliquary for the Talisman of Charlemagne by Froment Meurice and on the sword by Wièse presented to MacMahon. He published a lecture on French chasing, and later worked for Boucheron, Lucien Falize and Alphonse Fouquet. He was named a Chevalier of the Legion of Honour after the exhibition of 1878. Fannière Frères were noted particularly for their work in sixteenth century style. The figures on the clock related to candelabra which were executed in the same year for the Prince de Hohenlohe. Ernest Hue, gem-engraver, exhibited at the Paris Salons. Baugrand himself (1826-1870), ‘Joaillier de SM L’Empereur’, was at the height of his reputation in 1867. With Fossin he formed the French membership of the jury for jewellery in the exhibition, a jury of which the president was the Earl of Dudley. Baugrand’s display included a peacock brooch bought by Lord Dudley, and a necklace made for the Empress Eugénie. The Queen of Portugal was known to have been another client in 1867.

Baugrand died during the siege of Paris in 1870. The expert adviser stated that the brevity of his career and the customary resetting of jewellery with precious stones had made his work very rare. The clock was Export of Objects of Cultural Interest 2004-05 a superb example of French Renaissance Revival goldsmith’s work, combining the arts of the modeller, the chaser, the enameller, and the engraver. Jewellery, and the associated arts of the enameller and the chaser, were of a special significance to Lord Dudley. His family traced its descent to Humble Ward, jeweller to Henrietta Maria, wife of King Charles I, and he became one of the most famous jewellery collectors of the second half of the nineteenth century, many of the jewels being worn by his young second wife, to whom he was married in 1865 and by whom he had a son and heir in 1867. This expert adviser stated that the clock epitomised the exhibition work of a French imperial jeweller at his moment of greatest influence, and the patronage of a pre-eminent British collector of jewels. As rapporteur and president of the jewellery class in the 1867 Exhibition, Gustave Baugrand and Lord Dudley sat on the same jury. The clock was seen by contemporaries as one of the most important objects in Baugrand’s display, a virtuoso example of enamelled Neo-Renaissance work created by a named group of the finest goldsmiths working in Paris. The applicant did not comment on whether the clock met the Waverley criteria. We heard this case in November when the clock was shown to us. We found that the clock met the second and third Waverley criteria and that £295,000 represented a fair valuation.