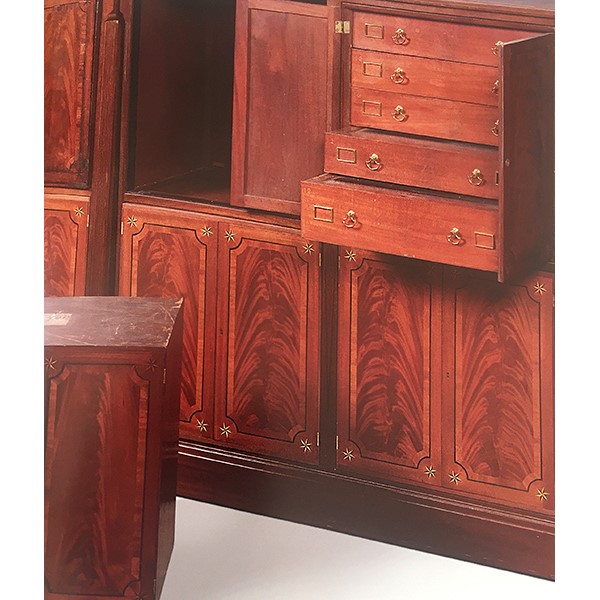 The Banks Cabinets from the Natural History Museum, London

The Sir Joseph Banks cabinets rumoured to have been sold to businessman Kerry Stokes in last weekend’s Owston collection sale were made of mahogany, not red cedar as described in Bonhams’ lavishly produced – and telephone book-sized – catalogue.

A late amendment to this end was made in fine print in the sale’s online catalogue, but no physical notice of the amendment was posted in Sydney’s Overseas Passenger Terminal during the two-day sale. Bonhams international chairman Robert Brooks said from the rostrum before the lot went up for sale only that the cabinets were being sold “as viewed’’.

The 12 George III collector’s cabinets, among the highlights of the sale – albeit not easily accommodated and having very limited use – were knocked down for $250,000 to Melbourne antiquarian history book dealer Andrew Isles, who is thought to have been bidding on behalf of Seven Network owner and long-time collector Stokes.

Isles, who will not disclose the identity of his client, says his client was aware ahead of the sale that the cabinets were made of mahogany, and that he viewed the importance of the cabinets’ provenance as the overriding consideration.

British botanist Banks was on Captain Cook’s first trip to Australia, and he used the cabinets to store his geological specimens when he was back in London.

They transferred via descent (along with Banks’s library and herbarium) to Robert Brown, who gifted them to the British Museum, which sold them at Christie’s South Kensington, London, in 1984.

Tasmanian antique dealer John Hawkins bought them at that auction for £2,340, on selling them at a later date to Warren Anderson, whose collection Bonhams was dispersing last weekend after his private company, Owston Nominees No 2, was put into receivership. Hawkins was gobsmacked about the Bonhams error as the cabinets were correctly catalogued by Christie’s as mahogany in 1984.

The online amendment said a “microscopic analysis of the timbers used in the construction of the cabinets’’ had “contradicted the original identification by J. H. Maiden, director of the Botanic Gardens and Herbarium, Sydney, in 1914’’. Bonhams Australia chief executive James Hendy says any prospective buyer who asked had been informed personally and in condition reports about the change.

Last weekend’s sale grossed $13.1 million including buyer’s premium, not the $12 million originally flagged by Bonhams, the difference being due to a computer error. Owston receiver Korda Mentha is thought to be getting about $10 million, the hammer total less the GST component, which will go towards discharging Owston’s debts.

It is thought Bonhams waived the vendor fee and offered to rebate half the 20 per cent buyer’s premium to secure the sale.