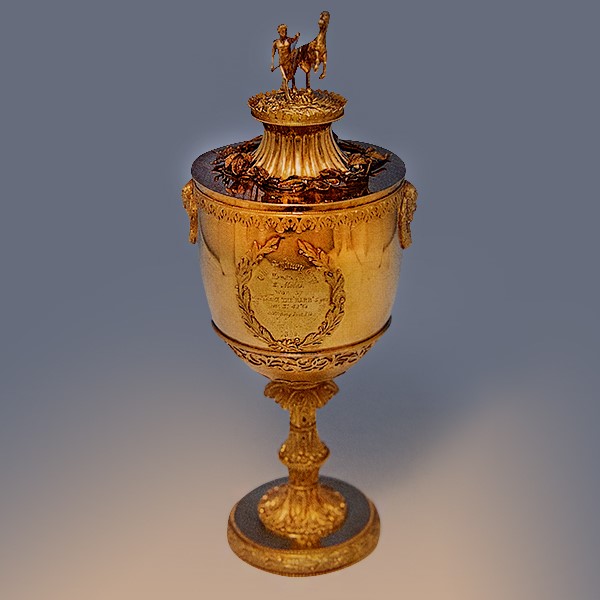 The Barb known as The Black Demon was one of Australia’s greatest racehorses. In 1866 he won the A. J. C. Derby and the Melbourne Cup, in 1867, the V.R.C. Champion Stakes, the Port Phillip Stakes at Flemington and the Hobart Town Cup. In 1868, the Sydney Cup, and over the period 1868-69 he started seven time for seven wins, with three races of three miles, three over two miles and one over a mile and a quarter.

As a result, The Barb was considered invincible, so for the 1869 Sydney Cup he was forced to carry the crushing handicap weight of 10st. 8lb. His win was considered ‘an exceptional performance of gallantry’. No other horse has carried over ten stones to win the Sydney Cup from that day to this. His silver mounted hoof holds pride of place on the desk of the Secretary of the Australian Jockey Club.

I purchased this cup through Miss Tait in Moss Vale from another branch of the family in 1982 and have since sold it three times. It is the earliest surviving Australian made gold Sydney Cup. The first known cup is English and was supplied for the Inaugural Race in 1866 by the Sydney firm of  T. T. Jones & Son.

It is possible that Quist gained the commission to manufacture the Sydney cups commencing in 1867. If so, the 1867 and 1868 gold cups are missing, the 1870 cup is the property of the National Trust,being left to them by the Traill family of Bathurst (see 19th Century Australian Silver, Colour Plate 4). With the 1871 cup came a contemporary portrait of the winning horse, Mermaid, painted by F. Woodhouse, it is in the Powerhouse Museum, purchased by me in 1997 for in excess of $200,000 with the premium.

J. B.Hawkins,  The World of Antiques and Art, Dec 2000 – June 2001 Australian Goldsmiths’ Work 1834 -1950, here I note that Grimwade and E. Alfred Jones record that fewer than a hundred extant hallmarked British items, raised from the flat in gold, made between 1507 and 1830, appear to have survived.  In this article I list 33 surviving examples of Australian worked gold raised from the flat, made over a period of 116 years, of these seven are in the great ‘Australiana Collection’ put together by Trevor Kennedy.

Pastures and Pastimes an Exhibition of Australian racing, Sporting and Animal Pictures, in the 19th Century. The Catalogue by the late Colin Laverty.

Laverty describes Item No 32 as: a painting by Thomas Hamilton Lyttleton 1826-1876 in the collection of the Australian Jockey Club in Sydney of  ‘The Barb’ with the jockey W. Davis wearing the owner John Tait’s yellow and black silks in 1867.

The Barb won the 1886 Melbourne Cup as a three year old, being John Tait’s first Melbourne Cup winner. Frederick Woodhouse stated in his book The record of the Melbourne Cup published in 1889 Mr John Tait was overwhelmed with congratulations, every Australian who know anything about a horse became enthusiastic over ‘The Black Demon’. When he won the Champion Race on New Year’s day 1867, 5 minutes 38 seconds, 3 miles, thus putting all previous records in the shade, they proposed to send him the England, many sportsman must regret that the project was not carried out, for that he a was a veritable clinker is beyond dispute.