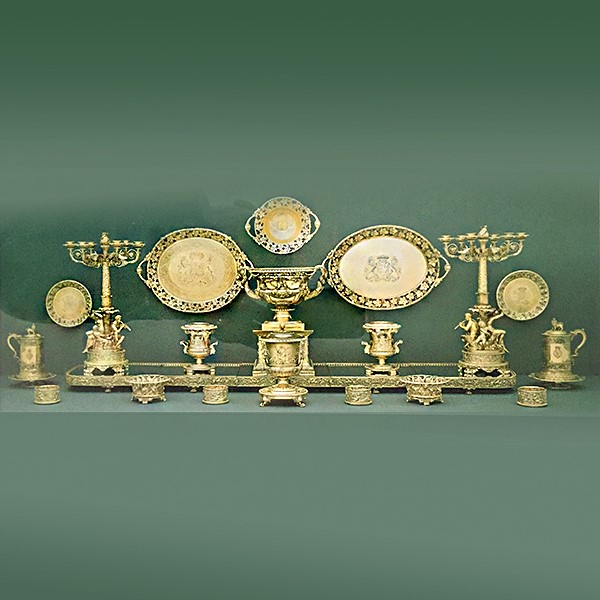 Part of the Packer Collection of English Regency Banquet Silver

Caption to the photograph:

In 1802 Rundell and Bridge, the Royal Goldsmiths since 1797, employed the design skills of Benjamin Smith, a chaser and draughtsman, and his partner, Digby Scott, to manufacture at Greenwich silver gilt items decorated with “a frieze of vines and fruit”. This patterned border, probably designed by Smith, was exclusive to the Firm and the production mainstay which enabled the partners to register their mark in October 1802. The Packer/Lonsdale two-handled tray of that year is evidence of their confidence, although the wire work design still owed much to the Firm’s Birmingham, Boulton origins.

In 1804 the Duke of York was the first member of the Royal Family to place an order for silver gilt in this pattern: a pair of baskets, a pair of cruets and four coasters. In the following year his brothers, the Dukes of Sussex and Cumberland, followed suit with orders for two-handles trays and tazzas, the Prince Regent ordering a suite of six trays in two sizes and eight tazzas in 1809. The Duke of Richmond ordered a large service from Rundells in 1807, and the Packer collection contains a tray and two tazzas of the final compact border design, and a pair of wine coolers on stands with vine leaf tops.

In 1807 the partnership of Smith and Scott broke up, and Rundell Bridge and Rundell acquired the business of Paul Storr as a fully owned subsidiary. Prior to this, both firms had executed silver for Rundells based upon the designs of the Frenchman, J.J. Boileau. However, fashions were changing and the publication of Tatham’s Designs for Ornamental Plate in 1806 required a new “massiveness” in English silver. This need was met by Theed (1764-1817) who turned the ideas of others, particularly Flaxman (1755-1826) and Stothard (1755-1834), into designs achievable by the working silversmith. The Packer collection contains examples of this collaboration in the Bampyfylde Centrepiece of 1809 and the Watson-Taylor Candelabrum of 1816, both by Storr. Designs previously exclusive to Scott and Smith were to be manufactured by Storr as evidenced by the Packer baskets of 1814 bearing the arms of the Duke of Clarence, yet another son of George III.

The incapacity of George III led to the Regency which saw the junior members of the Royal Family turning a previously small bespoke industry, concentrating on utility, into a silver gilt grandeur in the imitation of gold. The purchasers were lucky to patronize firms of integrity such as Rundells, Scott and Smith, and Storr whose standards of design and execution left nothing to be desired.