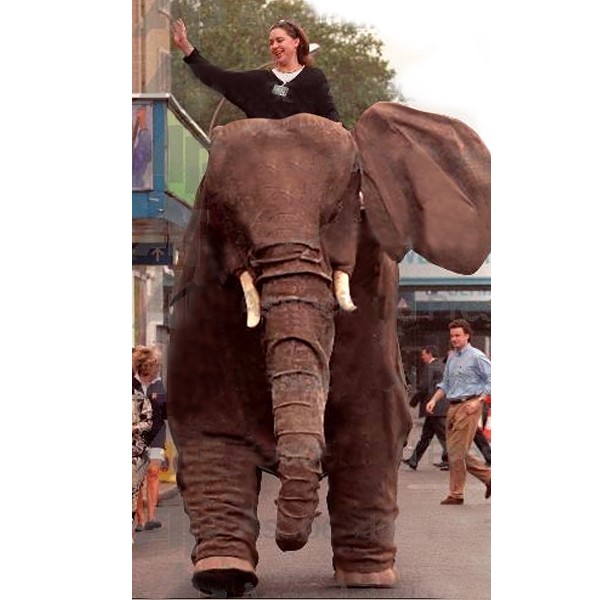 Nellie the elephant was exhibited by Hawkins & Hawkins at the Olympia Antique Dealers Fair, London, where I sold her to America in 1998.

Driven by Emma Hawkins as a publicity stunt for the Olympia Fair, London this photograph went all over the world.

The article and comment below was published on Tasmanian Times https://tasmaniantimes.com/2016/09/nellie-the-elephant/

The Americans gave her a Heart Transplant and completely destroyed her integrity hopefully retaining her four cylinder Ford engine which was started with a crank handle up her backside with the exhaust down her trunk.

I had her re-skinned and she is shown here being driven by my daughter Emma Hawkins at Olympia.

Nellie left Colwyn Bay and by 1950 she was somewhat derelict see below.

She was the invention of Frank Stuart.

• Larry Gavette, Michigan, in Comments: Just a minor correction or two to the previous comment. The Wendell/Jumbo elephant recently sold was not the elephant he references although they are brother/sister/siblings with Frank Stuart as originator. I used to own Jumbo, and have seen the Nellie mentioned, both in England in 1980 as well as here in Michigan where it resides since arriving in Pennsylvania in the mid ’90’s I believe. The two machines, Nellie being an earlier model based on the changes between their mechanics, were together last year at the auction at which Wendell was sold this year, the owners of Nellie having taken their pet for a ride so that two machines could be in the same place for the first time ever. (I have been fortunate to have been on three of the four existing models and videoed the electric version as well).

The Hawkins elephant resides in Michigan yet as far as I know, but I am unsure as to who the new owner of Wendell/Jumbo is…yet. The last working model gas powered elephant is in Adelaide, used yearly in the Christmas Pageant (can be seen on youtube) Julianne, the owner, is the daughter of the man who saved Nellie after John Martin department stores stopped using her in parades. I thank you for the continued interest in the elephants, a subject I have been researching since 1979, and thank you for crediting cyberneticzoo.com on your site. Reuben Hogget, the site developer passed away in April, but like the elephants the information he collected, collated, and shared, remains for others to enjoy and be amazed at.