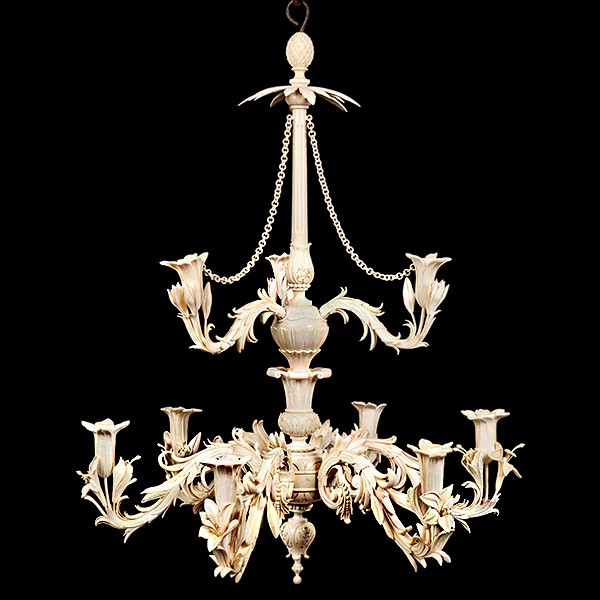 Carved by Philipp Perron probably for King Ludwig II, if this can be finally proved, installed in his palace at Linderhof before 1875.

In research carefully conducted by Dr Max Tillmann, March 2019, quoted in part below, he was unable to confirm this attribution. Of the five known ivory chandeliers four are however seemingly unique to the Wittelsbach Court. This the fifth is closely connected.

The present ivory chandelier finds a tantalisingly direct parallel in the celebrated ivory chandelier with 16 branches made by Philipp Perron, commissioned in 1874 by King Ludwig II of Bavaria for the Hall of Mirrors in the Royal Castle Linderhof. https://en.wikipedia.org/wiki/Linderhof_Palace

Both chandeliers feature candle arms in the form of blossoming lilies, which as a heraldic motif epitomises the King’s veneration for the world of the Bourbons, celebrated in the decoration of Linderhof. At the same time, these chandeliers stand in a long and prestigious tradition in the Wittelsbach Palaces, where collector and mirror cabinets were adorned with ivory chandeliers.

The impressive, two-tiered chandelier is designed around a baluster-shaped, central stem surmounted by a crown of leaves and a pine cone finial. Three candle arms on the upper tier and nine candle arms on the lower tier are in the form of beautifully carved flowering twigs terminating in lily blossom as nozzles, which are surrounded by bunches of open blossoms and lily buds. The scale of the whole ensemble is breath taking and would have created a dazzling effect once illuminated. The bespoke princely tradition of ivory chandeliers at the Wittelsbach court causes these chandeliers to be extremely rare.

The tradition of Wittelsbach ivory chandeliers was founded by Elector Maximilian I of Bavaria (1573-1651; reg. 1597-1651). Christoph Angermair, the elector’s court ivory carver, was commissioned to create the impressive four-arm chandelier with laughing satyr head and coat of arms of Electoral Bavaria and Lorraine, executed in Munich 1623-1627 and preserved in the Bayerisches National museum today…

The second example of the Wittelsbach ivory chandeliers belonged to Elector Max Emanuel (1662-1726; reg. 1680-1726) and can arguably be traced back to the elector’s Palace in Saint-Cloud near Paris, where the chandelier was recorded in 1714 in the “Cabinet du tour” following the State Bedroom of the prince….

The fourth is the famous ivory chandelier of King Ludwig II (1845-1886; reg. 1864-1886) in the Hall of Mirrors at Linderhof Castle is clearly inspired by the three-tier chandelier of Max III Joseph. The Neo-Rococo interpretation of the eighteenth-century room-type, which was created in 1874 after a design of Georg Dollmann and the theatre painter Joseph de la Paix, they combined the old Wittelsbach tradition of the Kunst-Cabinet in the crowned by an ivory chandelier, with the iconography of the Bourbons and their respective lily-theme…

Philipp Perron (born 1840 in Frankenthal, Palatinate, died 1907 in Rottach at Lake Tegernsee) was the sculptor responsible for the richly carved ivory chandelier. It is due to the King Ludwig II that the old Wittelsbach tradition of ivory carving was revived and that Munich became once again the German centre of that art. As a young man Perron went to Paris where he was trained in the sculptor’s workshop of his brother Jean. He then turned towards academic training in the thriving art city of Munich.

Soon Ludwig Il became aware of the young artist; a trifle had the effect. Perron carried a cane whose ivory carved crutch was a small work of art. The monarch knew and encouraged the young man’s sculptural talent, and Perron did not disappoint the king. When Ludwig II began to realise his building projects, he showered Perron with orders for his magnificent castles. In Perron’s studio, 20 to 30 mostly Italian marble specialists worked according to the master’s ideas at that time. He worked like a possessed man to turn his patron’s dreams into reality. Hundreds of sculptors and modellers worked for the royal castles Herrenchiemsee, Neuschwanstein and Linderhof in the workshops of the royal professor and court sculptor Philipp Perron. However, Perron’s most beautiful way of expression was ornamental carving and he took the lead among the ivory carvers working in Munich at the time.

RESEARCH UNDERTAKEN WITH RESPECT TO THE HAWKINS IVORY CHANDELIER

Upon examination on the spot at Linderhof Castle John Hawkins suggested that the present chandelier may have been made to compliment the large chandelier for the alcove in the same room, i.e. the Mirror Hall, or the entrance hall where it is correct for scale. The large and matching chandelier might have originally hung in the centre of the room above the table and not in the alcove where it now hangs. It is indeed far too large for the small space.

Another suggestion was made, namely that the scale of the present chandelier would be correct for the inner Hall with its simple plain ceiling. The later placement of the large pedestal and vase in the centre as evidenced by the floor may have caused its removal and hence possible later sale.

In view of these observations the research was approached starting with an exchange with Dr Afra Schick who is currently the best expert on the furnishings of Ludwig’s palaces. She researched the designs of the Pössenbacher-furniture work-shop within the context of Linderhof, Neuschwanstein, Herrenchiemsee as published in her book: Möbel für den Märchenkönig. Ludwig II. und die Münchner Hofschreinerei Anton Pössenbacher (bilingual German and English edition), Stuttgart 2003.

Based on the research which has been done previously by Mike Huth, Dr Schick set the guideline, that the most valid approach to approve the suggestion should be to double-check the expenses in the “Hauptrechnungen der kgl. Cabinets-Cassa” in the Geheimes Hausarchiv, i.e. the family archive of the Wittelsbachs. These files contain all expenses for the furnishings of Ludwig’s palaces. The files have sections for each palace, each room and each year. As all commissions of the King are recorded in these files, the approach was straight-forward and granted a definitive result.

After permission was granted to examine the files at the Geheimes Hausarchiv of the Wittelsbach family all royal commissions for Linderhof from the beginning of the building work in 1870 up to the completion of the palace and its interiors 1878 were examined. Much worth-while information on ivory works Ludwig commissioned from Perron came to the fore. For instance the proof for the story that Ludwig acknowledged the ivory works of Perron spotting Perron with his cane on the streets of Munich: the first work the King acquired was a cane in 1870 for 123 Gulden.[1]  Up to 1874 the King bought another cane, a goblet of ivory and several non-specified works in ivory, which were not overly expensive pieces, supposedly small works.[2] In 1874 and 1875 the commission of the large chandelier for the Hall of Mirrors at Linderhof is recorded. Perron received in total 28.958 Gulden.[3] Up to 1878 Perron is strongly involved in the work of the sculptural decorations in wood and plaster. Yet no further chandelier in ivory is recorded in the King’s invoices for Linderhof.

Hence we must note that according to the available documentation the present chandelier was not commissioned by Ludwig II for Linderhof Castle.

For an exchange on the subject and in terms of some more general thoughts on Philipp Perron as an ivory carver I approached Edda Behringer, the Director of the German Ivory Museum at Erbach Castle. She had no further knowledge on the workshop of Perron. But she mentioned something, which is interesting to know, namely that the museum’s ivory turner Mr Helmut Jäger had restored the Linderhof chandelier a while ago. She also referred to the publication of the former Director of the Museum, Hans-Werner Hegemann (1911-1985), Das Elfenbein in Kunst und Kultur Europas. Ein Überblick von der Antike bis zur Gegenwart, Mainz 1988. It was exciting to find here a first reference to further ivory chandeliers designed by Perron.

Hegemann wrote, that comparable to the big chandelier in Linderhof, the King commissioned two further chandeliers, designed in the style of Meissen porcelain, for the Palace of Herrenchiemsee, just before the King’s death. Hegemann explained, that those chandeliers were not executed, but that the plaster models still exist.[4]

It was possible to find the archival proof for the commission of these chandeliers in a document, listing Perron’s works commissioned for Herrenchiemsee, preserved at the Geheimes Hausarchiv.[5] The list includes the work of plasters models for the figure of the angels incorporated in a chandelier. In exchange with the furniture conservator of the Palace Department it was also possible to identify the plaster models for these two chandeliers, featuring the decoration with angels, as works of Perron.

This concerns the two chandeliers which the King commissioned before his death.

They were, according to Hegemann, supposed to be executed in ivory.  The Palace Department had no information about the maker of the chandeliers. This is to some extent due to the fact that the Palace Department does not consider research to be one of its responsibilities which explains the deplorable lack of expertise, particularly towards the heritage of King Ludwig II.

For the interpretation of the present small chandelier we note that firstly Perron kept on designing chandeliers and secondly, that he referred back to the aesthetically more daring style of the great piece in Linderhof with lilies, when he created the smaller version the subject of this research.

Up to King Ludwig’s death at Lake Starnberg in 1886 Perron must have been extremely busy with his work for the diverse royal palaces, especially Herrenchiemsee, with little or no time for other commissions. Hence the present chandelier should be considered an individual commission later than 1886, a time when Perron was still much in demand with diverse clients. A date of production between 1890 and 1900 appears to be in line with the style of the new and upcoming Art Nouveau, shown by the highly naturalistic approach to the chandelier’s floral decoration.

In view of these observations on the present chandelier the next step taken was to look out for information coming from a potential inheritance of Perron related to his workshop.

I contacted the local museum of Perron’s city of birth, Frankenthal in the Palatinate which even commemorates contemporary artists with a so-called Perron price. The museum, called Erkenbert-Museum, was in fact built up in the early 20th century by a relative of the sculptor, named Louis Perron. See the museum website:

I contacted the current museum manager and the former director, named Dr. Edgar Hürkey, who had published on the family Perron which includes several artists up to the mid-twentieth century. Dr. Hürkey forwarded me the following: The city of Frankenthal inherited from Perron, who died in 1907 in Rottach at Lake Tegernsee, 150 plaster and terracotta models, which were displayed in the theatre hall close to the town hall. Due to the heavy bombing of the city during in World War II in 1943 all models are today lost. Amongst those models were a colossal statue of the god Apollo, a figure of King Ludwig I, an equestrian statue of Louis XIV and several mythological and allegorical figures.

Unfortunately, Dr. Hürkey had never come in contact with any documents pertaining to  Perron’s work-shop and does not believe such documentation still exists. Today the museum displays the loan of a fabulous chess game which Perron created in 1871 as a nearly satirical comment on the Franco-German War. I was able to get in contact with the owner of the chess game who is in fact a great-grandchild of Perron,  Dr. med. Hinrich Seesko. Dr. Seesko turned out be extremely informative and interested in an exchange on Perron in order to promote the appreciation of the sculptor.

While Dr. Seesko had no further information on the chandeliers of Perron, the works and documents in his possession would be central to any further work in terms of future publication or exhibition’s of Perron’s oeuvre in ivory.