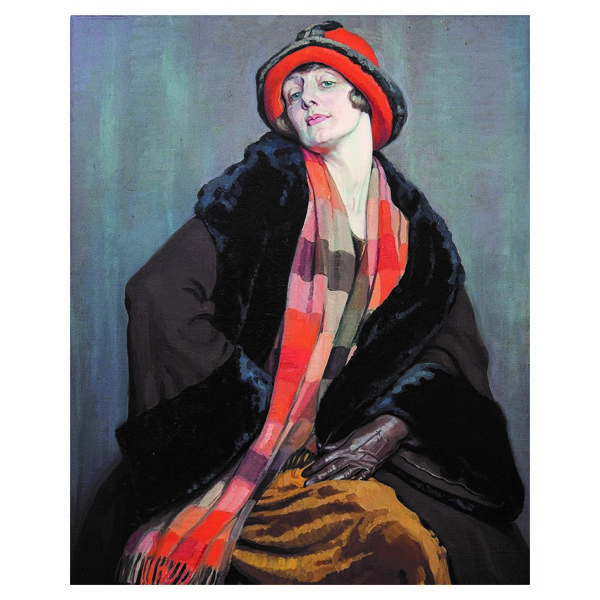 An important portrait by Hilda Rix Nicholas of her fellow Australian, travelling companion and friend, Dorothy Richmond painted in Paris in 1925 and exhibited at the Salon des Beaux Arts # 930. In its original frame with attached labels.

A case could be mounted that this is one of the finest portraits of a woman by an Australian artist either male or female painted in the first half of the 20th century.

I suggest that the painting should be seen in the context of a emancipated female artist now free to travel and entitled to vote who had left Australia in June 1924 to established her studio with Dorothy Richmond in Paris at 84 Rue d’Assas in September that year. The canvas was purchased and stretched by Lucien Lefe…- Por… in Paris and bears their suppliers label to the canvas and the stretcher. After Exhibition in Paris the painting was taken to London on the evidence of the frame by James Bourlet and Sons Ltd The French Exhibition number was probably attached later in Australia.

The painting would seem to have been exhibited on the evidence of the label to the rear of the frame at the Beaux Arts Gallery in Bond Street ‘….Dorothy Richmond (An Australian) by H Rix Nicholas (Mrs) £10. ’

The two friends both rich and stylish as a result of Hilda’s marriage into the Nicholas/Aspro family and by inheritance on his death in the Great War were together in Paris at the height of a new age, encapsulated by the exciting 1925 Parisian Art Deco Exhibition which was to cement a new style of decoration into the public mind. This is the heyday of glamour,of Fred Astaire and Ginger, white tie and tails, as seen in my attached article on art deco dress watches.

Hilda returned to Australia in September 1926 an Associate of the Societe Nationale des Beaux-Arts, her work had been hung in the Summer Exhibition at the Royal Academy and been shown at major London Gallery.

It is interesting to contemplate the part played by Une/An Australienne/Australian in her success.

I have further information in my records on the Hilda Rix Nicholas painting which establishes the provenance in more detail.

After the painting was exhibited at the University Museum of Art, Melbourne in 1990, I received an important letter from Rix Wright, the son of Hilda Rix Nicholas, regarding its creation.

It reads in part:

It was good speaking to you on the phone regarding the painting ‘Une Australienne’ I am so glad you bought it and would be grateful to have the address should you re-sell her. As I mentioned it may one day appear among a good many other reproductions of mothers work in a book hopefully to be produced in the future.

I promise to fill you in on the history of the painting. The subject was Dorothy Richmond, great friend and travelling companion of the artist over many years. Hilda used her for a subject many times but this would be by far the most important painting of Dorothy.

My mother was approaching what may have been the peak of her career at that time. M. Masson was selecting works for the New Salon des Beaux Arts Exhibition of 1925 when he came to mother’s studio she and Dorothy had been through a traumatic session. Hilda declared she had ruined the work and had abandoned it face to the wall. M. Masson selected other works of Hilda’s then persuaded her to about face the portrait, ‘she had ruined’, ‘madam’ he said that is one of the best things you have ever done!’ Once more encouraged, Dorothy resumed the agonising pose and Hilda corrected whatever it was just in time for the Salon. The painting was wheeled in with paint still wet! It was duly hung in a prominent position and caused great acclaim for the critics and general public.

In 1926 Hilda was made an ‘Associate of the Salon’. This entitled an artist to send eight works a year for the rest of their life. She was the first Australian woman to receive such an honour.

I think Rupert Bunny was the first Australian man.

Hilda was first bought in France in 1911 and a series of Moroccan drawings at the start of her career. In 1926 the French Nation bought a large oil of hers ‘In Australia’ Rix Wright on horseback. I won’t bore you waffling on about high points in her career. I should however mention that your painting sometimes went by two other names, ‘The Orange Hat’ and ‘The Brown Glove’ ….Rix Wright

Charles Masson became the Director of the Musèe du Luxembourg in 1925 having been a curator for some 25 years. It was he that purchased “In Australia” from Hilda for the French National Collection for the impact of his promotion on artistic life in Paris see Green Cubism and its Enemies p131. The Musèe du Luxembourg was the museum in Paris created for the reception of living artists from 1818 to 1937. At the time of the purchase of Hilda’s painting the only place to see the works of the French impressionists was in this museum so it was quite an honour.

I have discovered three other references to the painting of which you may be unaware:

In May 1936 Hilda exhibited a collection of her work at the Athenaeum Hall in Melbourne. The collection was reviewed by Clewin Harcourt in the Argus:

‘….the artist is at her best in figure subjects. The most attractive portrait is, ‘The Brown Glove’ carried out in a beautiful scheme of colour, it is a most distinguished work. The Argus 19th May 1936.

Hilda returned from Paris in 1926 and ten years later in June 1836 she had her first major exhibition in Sydney which included ‘The Brown Glove’ at the David Jones Art Gallery in George Street. The exhibition was reviewed in the Sydney Morning Herald, 15th June:

The oil paintings which Mrs Hilda Rix Nicholas is displaying at David Jones Art Gallery are curiously uneven in standard. Some are nothing more than pretty and sentimental. The best work really has strength in it. Mrs Nicholas is a direct descendent of the French impressionist. She refuses to paint dark shadows but suffuses everything with a mellow vibrance of life which has blue as its dominant note. … In the department of portraiture ‘The Brown Glove’ announces itself as decidedly the principal exhibit. This picture was shown in the Paris Salon under the title of ‘Une Australienne’ Though at first glance a shade distorted, owing to the curious lateral sweep of the design, it soon sorts itself out into a clever study of personality, adorned by fine technical accomplishment.’

Her home town newspaper The Delegate Argus of the 30th July 1936 carried the following review:

‘The most important art exhibition of the year is that now hung in David Jones Art Gallery by a woman painter Hilda Rix Nicholas.

It is in subject and sentiment thoroughly Australian being the fruit of eight years sojourn on a sheep station in Southern Monaro.

Before that settling down however the artist had a thorough apprenticeship in Europe, in the business of putting paint on canvas. Here is no amateur with an offering of little pieces of ill drawn still life or feebly emotional figure painting, or landscape without personal vision….

The qualities needed to produce such a painting as …. ‘The Brown Glove’ include courage, it needs courage to paint big– a fine sense of draftmanship and keen observation of values with a knowledge of putting pure colour on canvas only given by experience ….’