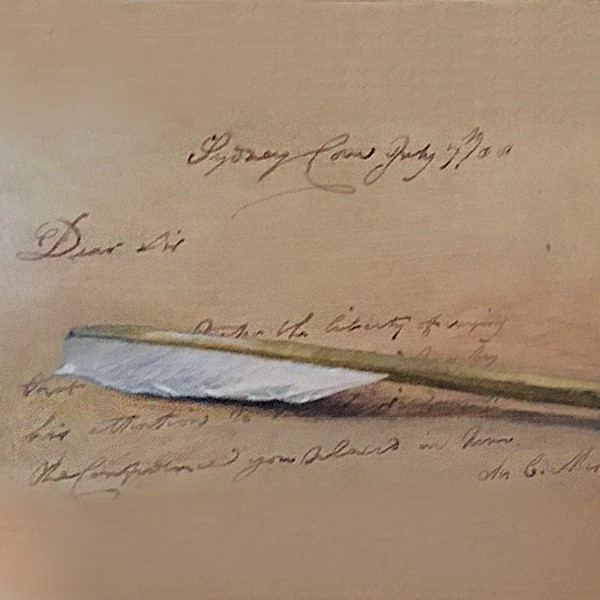 Detail copied from the Phillip letter, from a painting owned by the Hawkins family, by Raymond Ching, exhibited at the Royal Academy London.

The Collection of the descendants of Sir Charles Middleton

By 1786 Middleton had become disillusioned with his role as Comptroller of the Navy, seeing it as beset by internal politics between the Admiralty and the Navy Board. In 1786 he prepared a letter to the First Lord of the Admiralty indicating he would “contend no more for the public,” and urging the appointment of a successor who could “have more weight than I have had, and influence ministers to correct these evils.” The letter was never sent, but Middleton resigned his position in 1790 and effectively retired from naval affairs.

These included two original signed and dated Arthur Phillip letters, the most important being the report to Sir Charles Middleton, Comptroller of the Navy, describing the voyage out the number of deaths and why Phillip had moved from Botany Bay to Port Jackson. Written and signed by Governor Arthur Phillip in my tent, January 1788 on the Tank Stream.

The ‘Foundation Document’ of the Nation

The First Fleet left England on 13 May 1787 and arrived at Botany Bay on 18 January 1788 after a voyage whose success owed much to Phillip’s care. The original site proved unsuited to settlement. Three days later Phillip discovered an appropriate spot at Port Jackson and on 26 January landing operations began there. All told 1030 persons went ashore, of whom 736 were convicts, including 188 women, the rest marines and civil officers, 27 with wives, and 37 children. These people formed the human material for a gaol and not surprisingly were placed under a form of government that gave an unusual amount of power to the governor. Phillip’s first and second Commissions, dated 12 October 1786 and 2 April 1787, appointed him as the representative of the Crown in an area embracing roughly the eastern half of Australia together with adjacent Pacific islands. His responsibility was solely to his superiors in London and he was expected to carry out their orders as embodied in his first Instructions of 25 April 1787, his second Instructions of 20 August 1789 and official dispatches. Within these limits his powers were absolute. The Crown vested him with complete authority over the inhabitants and gave him the right to promulgate regulations touching practically all aspects of their lives. He combined executive and legislative functions and could remit sentences imposed by the Civil and Criminal Courts established under a warrant issued on 2 April 1787. Only the crimes of treason or wilful murder were exempt from this provision, but even here he could grant a reprieve while awaiting advice from London. Distance from Britain and the relative indifference of the Home Office towards the affairs of the infant colony enlarged even further the scope of the governor’s initiative and increased his responsibilities.

Repurchased and sold to a private museum in Sydney for $250,000.

Now in a private collection Australia.

Today I estimate them to be worth in excess of $1.5 million.

I have twice offered the ‘Middleton Papers’ to the Nation by direct contact with Prime Ministers to be kept at Parliament House, Canberra. Paul Keating had been bitten by the press over a dining table for the Lodge, he was completely in favour but could not make the move. Howard was completely dismissive.