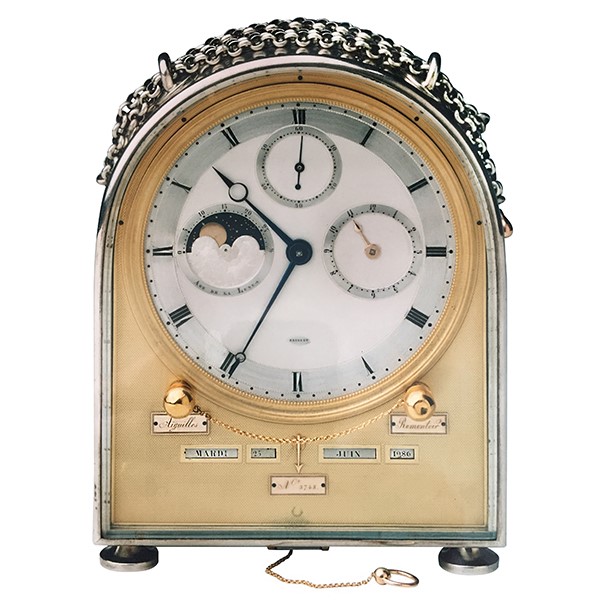 The dial with very fine engine turned centre and subsidiary dials for the age and phase of the moon, alarm and seconds, the silver gilt dial plate with 18ct gold and plaques for the number 3748 and the words ‘aguilles’ and ‘remontoire’. The winding holes with gold plugs attached by a gold chain. At the base of the dial are four rectangular apertures for the day of the week, the date, the month and the year.

The silver case with 18ct gold hinges to front and back doors and silver carrying chain, bears four poincons, being the Paris hallmarks for the period. The clock has survived with its original leather case and patent silver double ended Brequet key.

Sold: 23rd February 1825, to Monsiuer Bourlet for 5,000 francs, probably an agent for the purchaser. Agents frequently acted on behalf of royal households in the execution of commissions in this case Bourlet from La Havre a port on the English Channel may well have been acting for an English family. The original receipt signed by Breguet’s cousin and detailed setting up instructions survive, confirming the fact that that the final purchaser had not had start up instructions from the firm in Paris.