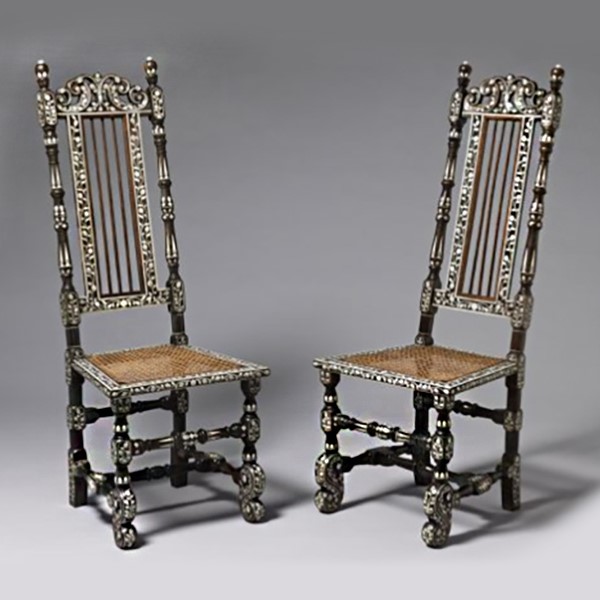 Provenance:
Edward Harrison (1674–1732), Balls Park, Hertfordshire, and assumed to have been acquired while he was Governor of Fort St George (Madras), 1711–17, or less likely between 1693 and 1707 when Harrison was an officer with the East India Company; by descent to Harrison’s daughter Audrey, later Lady Townshend; by descent at Lansdowne House, Richmond by 1811, then back at Balls Park, before being removed to Raynham Hall during the late 1840s or early 1850s; by descent to 8th Marquess Townshend at Raynham Hall, Norfolk from whom purchased via Blairman’s London.

Jaffer (op. cit., p. 176) describes these chairs as belonging to ‘[t]he earliest and only fully documented suite of this type…’. George Hammond Lucy acquired a related suite in 1837 through his broker William Buchanan from the dealer Samuel Isaac of Regent Street, London; the Lucy suite remains at Charlcote Park, Warwickshire (Jaffer, loc. cit.).

The form of the ‘Raynham Hall Suite’ (comprising ten side chairs, two arm chairs, one of which has been altered, and a pair of daybeds) derives from contemporary English seat furniture (see Adam Bowett) English Furniture 1660–1714 From Charles II to Queen Anne, Woodbridge, 2002, figs 8:60–8:71). Such chairs and day-beds invariably had caned backs as well as seats.