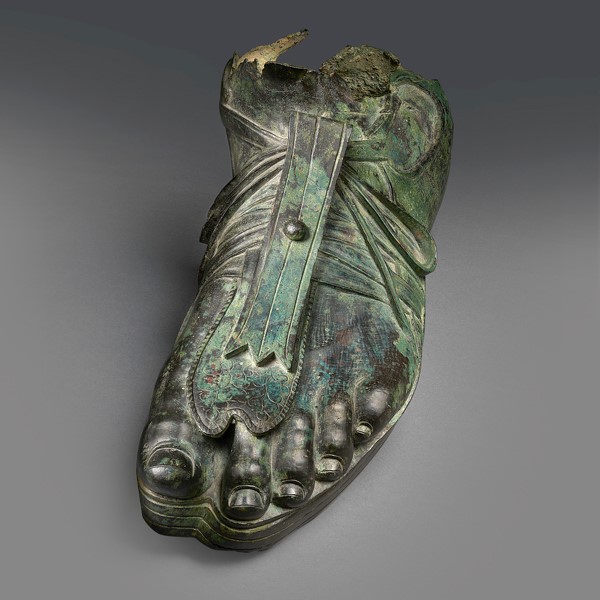 This superbly modelled left foot has a high degree of realism in the naturalistic modelling with highly detailed toes and toenails. The bronze is further enhanced by its rich green and black coloured patination. The foot is shod in an elaborately made and distinctive Greek style sandal called a trochas. The sandal has a solid heel with ankle loops. The sides have eyelets through which are threaded leather crisscrossed straps. The tied lace straps have large loops and a long frontal tongue or lingula which is folded over the tied laces. The upper tongue terminates in three prongs and is fastened with a central stud. The sandal is decorated with incised scrolling volutes on the lower frontal tongue and at the sides. The thick multi-layered sole is indented between the large and second toes. 13 in. (33 cm.) long

The stand-out qualities of this magnificent sandalled foot are its superbly and realistically rendered detailing, its impressive size and fine patination.

The masterful sculptor has so skilfully modelled the foot that, aside from its material, the viewer could be looking at real flesh with the skin naturalistically overlaying the toe joints and the individual toes having well-manicured cuticles and nails. The sculptor has equally convincingly conveyed the complicated crisscrossing leather sandal straps and the soft leather tied loops falling to each side, which contrast with the stiff leather of the central tongues and thickly layered sole. The detailing of the sandal’s construction has been minutely observed and the viewer can admire the artist’s skill in rendering the tension of the leather straps which are threaded through lunate slits on each side of the sandal and pulled over the top of the foot, with further straps threaded and pulled through the openings beneath the ankle.

Of extremely high quality and superb workmanship, the foot was once part of a monumental statue, perhaps of a wealthy and important aristocrat or, more likely, a portrait of a Roman emperor.

The sandal depicted on the present foot is an accurate re-creation in bronze of an elaborately made and sophisticated Greek leather sandal of a style which first appeared in the 5th century BC. The style was continually evolving, particularly from the 3rd century BC onwards and was subsequently adopted and made more elaborate by the Romans. The Greek version of this open sandal is echoed in the Hellenistic marble statue of Hermes by the Greek sculptor Praxiteles, found at Olympia. A version of this elaborate sandal type is also seen on the mid-4th century BC heroized ruler statue of the so-called Maussollos from Halicarnassus.

This thick-soled sandal is called a trochas (plural trochades) and the Roman more substantial version of it has a closed leather covering over the heel and sides which taper to the toes. As in the present sandalled foot, the solid leather sides had horizontal slits through which the wide strap-like laces are threaded to crisscross three times before going through large ankles loops. They are then tied in a bow at the top.